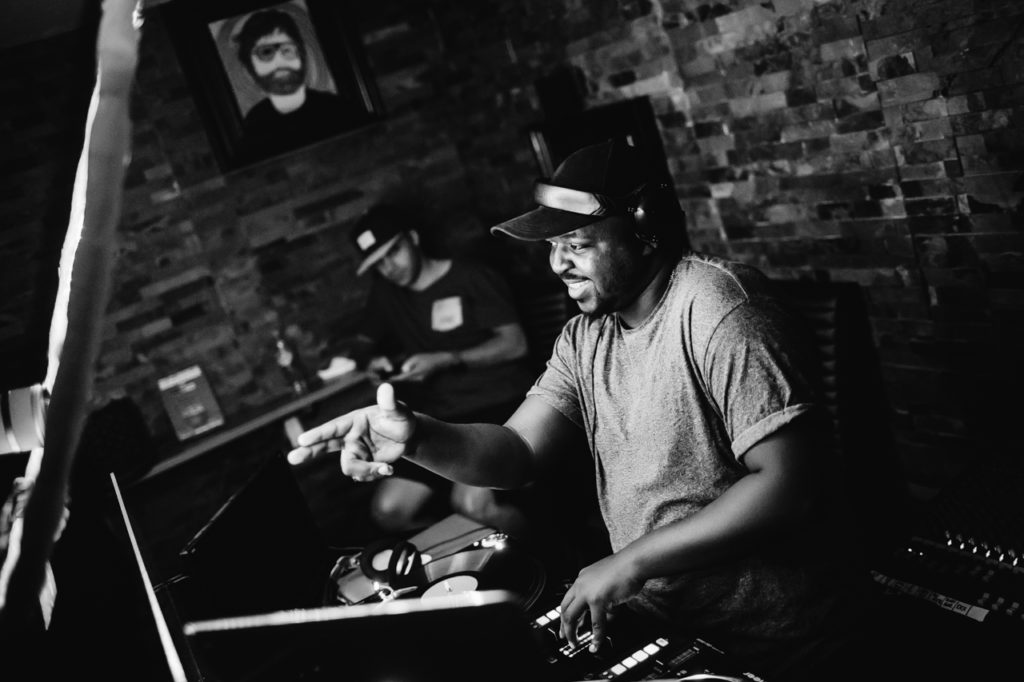 Ginger S. sat down with the latest winner of 360 DJ Residency on Thursdays DJ Flippside. Here is the interview:

Q1. When did you fall in love with music?

I’ve grown up around music. For example, in High School I always had earphones on. Growing up I was always listening to the radio, tapes and CDS. I always loved music. IN High School I was in Band and played Bass Guitar, Drums and was the sound engineer for school performances.

My family always had records around around. My uncle played the piano and my grandma was always singing around the house. Songs that were commonly played in my household were Prince’s “Most Beautiful Girl” Mark Morrison’s “Return of the Mack” and my uncle got me listening to L.L. Cool J, Tribe Called Quest and the Roots. All this came together and influenced my taste in music.

Q2. Who or what inspired you to become a DJ?

The inspiration came from within it’s a passion. As young boy, I remember hating when the song or tape ended. And I figured out that there has to be a way to connect the songs. I already had the concept of mixing as a young kid. By cutting and taping the songs together. I actually didn’t get my first pair of turntables until I moved to Dubai. I won the Pioneer DJ Competition in 2014, followed by the Red Bull Competition in 2015. Initially, I started honing my skills doing private parties.

Q3. How did you earn your spot in becoming a club DJ in Dubai?

After winning the competitions this basically opened the door for me to play at larger events. For example, playing in Abu Dhabi’s Formula 1 Parties, Beats on the Beach, Kevin Hart’s Party, and I got to open up for Wiz Khalifa.

Q4. What is your favorite drink?

When I am DJing. I try not to drink. I drink just Orange Juice. And When I am not DJing any type of brown liquor is good, except Hennessy. I drink a lot of beer though Heineken.

Q5. Who are your top 3 favorite hip-hop artists? What is it that you like about them?

Right now, I’m not gonna lie, I really admire Jay-Z because of his business model. I like his music a lot too. I like Kanye because he isn’t afraid of taking risks. His music is always a hit. The last couple of albums that he’s put out have been shun by the media, by everybody and then a month two months down the road everyone is like Ohhh that song is so lit. When he came out and played it at clubs everyone was like what the fuck is this? Now you play it and everyone is trying to vibe to it. Then I’d say Kendrick.

First of all,storytelling lines and bars admirable, J Cole is admirable, and he’s is what you call hip-hop culture and where it comes from Kendrick is what you call a true hip hop artist because he tries to balance everything within his music. His last album that came out it had everything and he is trying to reach out and give back to his community, which is something that is very hard to do right now, not just in hip hop music, which everyone always tries to blame hip hop music, but right now in music as it is no one is giving back to the community. How often you seen a guy that produces house give back to the community, a guy that produces dance give back to the community. In the Caribbean it is a different situation, but out in the west. Everyone is going to judge hip hop artist, but I like what Kendrick is doing. He is using his music to reach out to inspire.

There’s a couple of nights in the night life, residencies that I can not talk about right now. Right now, working on the mixtape project that I’m trying to put out everything out for everyone. Which will be posted on my website and social media. And I have a couple online features coming out.

Q7.What do you like to do in your free time?

Hang out with my friends. I watch a lot of TV, I usually don’t get time to watch TV, but if I get a whole day to myself, I’ll watch TV.

Q8. Where do you see yourself 5 years from now?

I: That’s a very good question. Idk. I don’t think I’ll be DJing like this 5 years from now. I’ll probably accomplish every possible thing. Probably a fulfilled DJ. So I would have moved on to bigger clubs every other night so like its going to be like fuck what Fatboy Slim does where he is DJing 24/7. So in five years I expect that.

Q9. Which clubs can people check you out at?

And more coming up.

Q10. Where can people reach you at?